Who needs a tall building when you've got the Arch downtown! Monday I went down to the riverfront and ascended the Arch to capture these images. You know, I've never been up in the Arch. I grew up in St. Louis. I watched the arch being built in the 1960's. The route for my grade school bus had us going East on Gravios every morning to Heege where you get an overlook of the city. We could see the two legs of the arch going up (with crane's poised on each one).

Anyway, after all these years I finally went up. There were times in the past where I tried to go up, but it was always too busy, the lines were too long. This time I went in, bought a ticket, walked over to the tram, waited about 2 minutes, got into car 6, and ascended to the top all in about 10 minutes. Hey, it's cool up there. Thankfully, the windows were not too scratched up and dirty. I can see scratches & blemishes on a few of my images, but by and large they are nice and clean.

Okay. Here are three Toy Town St. Louis City images. Choose which one you like the best. Whatever one tickles your fancy, makes you feel good, or even has some artistic quality (composition, lighting, etc.). Just pick your favorite. By the way, the last time we did this everybody mostly chose the black and white image of the Unknown Soldier grave stones at Jefferson Barracks. I did get in the top five in that contest. The theme for this current contest is "minuscule." I hope to win this one. Nothing less.

Remember to click on the image for a larger version. Don't vote for #1 just because it looks bigger because of it's orientation. 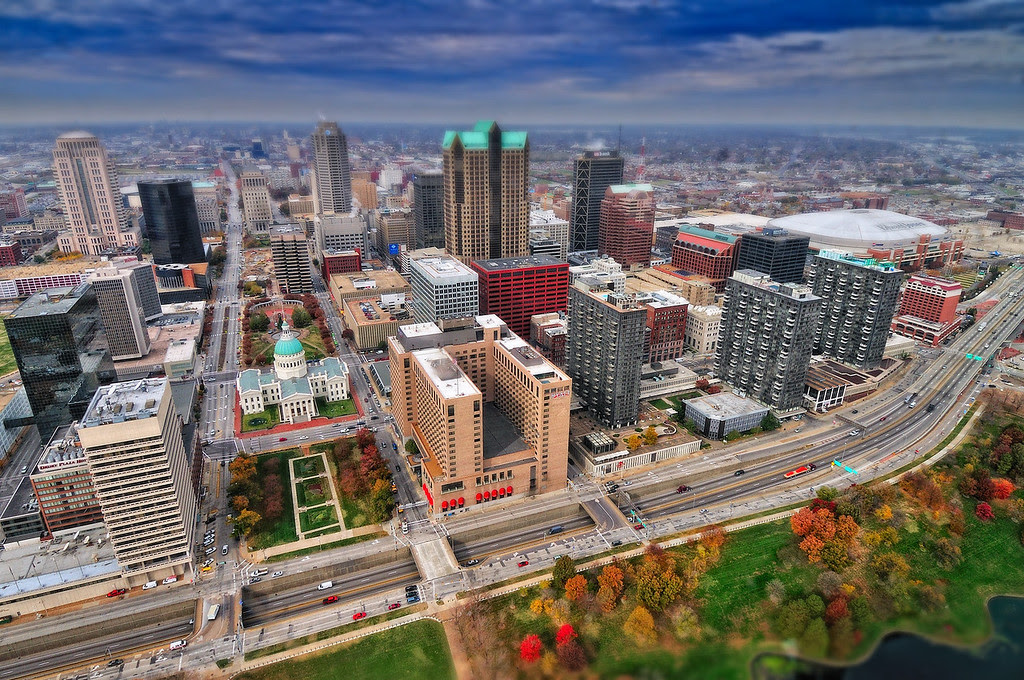 those are SOOOOO fun!!!!

I like two b/c everything looks small but the horizon is WAY out there. So, it looks like a model, but a vast one. The blurring is a little funny for me, but kind of cool anyway.

My vote is #1. I like the composition, and there's just enough blurriness to make your eye focus on the building (which really looks cool and toyish).

A little too much blurriness for comfort in #2.

The church one might be my fave if most of the practically-empty parking lot were cropped out and the church made the center of the pic. The church doesn't look quite as toyish as the courthouse. Not sure why. The trees are sure beautiful.

Angie: I think you're right about the cathedral. I'm gonna crop it and repost it. Thanks!

i love the fact that on the stadium one you can see advertising on the side of it, very clearly!! its amazing!

Great shots. If we're talking "toy town" then the courthouse is the best! When I first saw it I thought it WAS an pic of a model. Not until I read the post did I see that you took it from the Arch.

#1 -- does the best job of making me feel like I'm looking at a miniature rather than the real thing.

#2 -- too much of the bigness of the city to feel the minisculeness of the theme.

Well, I love them all, but since I'm a baseball fan, I'd have to say the stadium is mine.

Would you ever sell these?!? I would love to have them.

Thanks for the encouraging words. Sell them? Yes, probably. But I'm still thinking about the best way to do that. When I make some decisions about the most efficient way to sell these images, I'll post something here on my blog. Thanks!

Good Grief! I cannot believe you've never been up in the arch before! That's nothing shortof startling for a lifelong resident.

It's hard to resist the shot of Busch - because of my Cardinal fetish plus that is a very flattering shot of an otherwise average-looking stadium. Say...where did that grassy knoll come from? I think I'm gonna miss the big UGLY water-laden rocky crater that it replaced. :-(

#1 is my favorite. I've always loved the architecture of that building, but I also like the way the building contrasts with its surroundings.

WOW! I actually couldn't tell if these were real or if they were a scale model and you were pulling our legs. Beautiful! Please tell us what lens you used! Fabulous!
Nan
http://www.shawnanigans.net