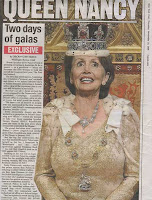 Is Bush really a "total failure"? That's what Speaker Pelosi said yesterday. I know that everyone on the left would have us think so. But is it true? Will his presidency be judged by history as a failure? The economy has been quite good for the last 8 years. It's still not bad. Unemployment is low. We've had steady growth. He cut taxes. And what does he have to do with high gas prices right now? Bush has appointed good Supreme Court Judges. The war in Iraq has turned out to be better than most thought it could ever be. I get the impression that EU leaders respect him, even if EU people have bought into the way he has been caricatured by our press both here and abroad.

All this presidential-election-year rhetoric is really getting old. On every front. And the Media's doom-and-gloom reporting is going to drive the economy down even more before the election. It's so predictable. It happens every four years. Why don't we just have the election next week so everything can get back to normal. I don't want to have to listen to four more months of childish, irresponsible political rhetoric.
Posted by Jeff Meyers at 8:29 AM

Email ThisBlogThis!Share to TwitterShare to FacebookShare to Pinterest
Labels: politics

And yet, the judiciary comittee is holding a hearing on his abuses of power (as detailed in Kucinich's articles of impeachment) and Pelosi doesn't want the House to take a vote on impeachment.

Aren't you glad that we are postmils? Ha! I am tried also of the media's drivel and their new love affair with their new messiah. I think Bush is a good Christian man (how can we doubt what one claims?) and can certainly not be charged with being a conservative but has done a fair job while in office - though I wish he would have been a better conservative than his father.