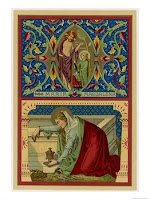 Luke tells the story of Jesus eating in the house of Simon the Pharisee in Luke 7:36-50. However the prostitute was able to avoid the bouncer at Simon's front door, once inside she makes a beeline for Jesus. While Jesus is reclining at table, with his legs and feet stretched out behind him, the woman begins to do what she came to do. She "brought an alabaster flask of ointment, and standing behind him at his feet, weeping, she began to wet his feet with her tears and wiped them with the hair of her head and kissed his feet and anointed them with ointment" (Luke 7:37,38).

Why didn't Jesus' shoo her off? He could have withdrawn his feet and asked the woman to come back at a more appropriate time. After all, Pharisees and presumably influential men from the city were dining with Simon and Jesus. These were people Jesus hoped "to reach" and so it would have been advantageous for him to avoid even the appearance of impropriety. Doesn't the Bible say that we are to "avoid every appearance of evil"?

Well, actually it doesn't say that. Paul warns in 1 Thessalonians 5:22, "avoid every occurrence of evil," or maybe, "everywhere evil appears, avoid it!" There's nothing in that passage about avoiding what appears to be evil. Rather, it's about avoiding evil "when and where it appears." The ESV avoids the word "appearance" altogether and translates it, "Abstain from every form of evil."

Even so, surely Jesus could have talked to the woman and convinced her to show her appreciation at some other time and in some other way so that her actions would not have caused such offense to Simon and his guests. But because he didn't, Simon puts the worst sort of interpretation on Jesus' acquiescence to the woman's handling of his feet. He is offended. He says to himself, "If this man were a prophet, he would have known what sort of woman this is who is touching him, for she is a sinner" (v. 39).

I'm not going to explain Jesus' parable and rebuke to Simon. You can read that. It's well known. My point here is that Jesus refused to cater to Simon the Pharisee. He wasn't going to play his game. He didn't care what Simon thought. Jesus would not allow the Pharisees to set his agenda for him, to dictate what he could and could not do in his ministry. He didn't care how they might have interpreted his ministry. They could play the flute all day, but Jesus wasn't going to dance (Luke 7:32).

There's a huge lesson here for the church as the extension of Jesus' ministry on earth (Acts 1:1). I'll let you figure out what it is.