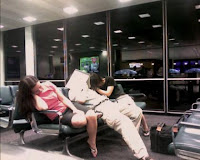 I'm stuck in the Atlanta airport. I think everyone else in the South East is too. The tropical-storm-turned-hurricane seems to have royally messed up the flight schedules. I've been here since 3:30 and it looks like I won't leave till 11 PM.

I wish I would have brought a movie to watch. I don't see anything interesting to download from iTunes, but I ought to take a look again and lower my standards a bit. I'm listening to the TWIT podcast right now, but that's almost over. I've got Gibson's Spook World on my iPod. Oh, that's right. I had to get a new iPod so I got one of the new squat Nanos. They ought to be called iSquat or something. But, man, are they thin. Super thin.

There's something yucky about airports. I don't think I can put it into words. Perhaps it's the lack of fresh air. But I always feel greasy when I get home if I spend more than a hour or so in one of these modern marvels.
Posted by Jeff Meyers at 7:30 PM

Email ThisBlogThis!Share to TwitterShare to FacebookShare to Pinterest
Labels: Personal

It looks like, at least from your pictures, that you have gone from heaven at the beach to hell in the airport!

That's what happens when your wife doesn't go with you on your trip!

I know, I could have gone with you, but who would play with your puppy for you while you were gone?

Anyone who chooses a puppy over the beach needs some serious therapy!

Well, that's the normal reaction, Lori, but you don't have MY puppy;-)

He's the beach and all that's wonderful in God's creation rolled up into a little white ball of fluff!

Plus, he never talks back or gives me a dirty look or makes me feel guilty.

However, there are a FEW decent ones out there from my experience. The airport in Amsterdam is pretty good if you have a long layover that's planned or, in your case, unplanned.

Ed: I've never been to Amsterdam, but Helsinki was awful nice. I was there for a couple of hours and it was very pleasant.

Probably the worst airport, in my experience, is St. Petersburg, Russia. Perhaps all the Russian airports are this bad, but it's hard to imagine anything much worse. Calcutta wasn't much better.