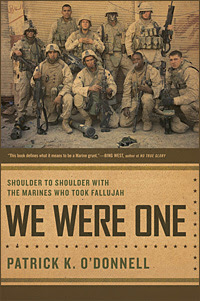 Lately I've been reading accounts of the battles in Iraq. If you don't know anything about this war except what you hear on the TV news, you don't know squat. I've read quite a bit of WWII history and I've been surprised at the similarities. I should have known that war is war. Bracket the new technology and you have the same thing - dedicated, tough young men fighting together to kill our enemies.

And make no mistake about it, our men are fighting and killing our enemies in Iraq. Even if it wasn't true that Saddam had weapons of mass destruction, and even if he had no direct connection with Al-Qaeda and what they did to us on 9-11, nevertheless, since we've been in Iraq we have been routing out and killing scads of terrorist there, mostly Al-Qaeda. The reports from the battle of Fallujah (Nov. 2004) confirmed terrorists from 18 different countries were killed in that city. Even Chechen rebels were there, dressed in their own uniforms, and using their own distinctive tactics against our marines!

Before you make a critical comment about this post or the war first go read Patrick O'Donnell's Were Were One. After that, feel free to say whatever you want.
Posted by Jeff Meyers at 2:55 PM

I recently finished Lone Survivor by Marcus Lutrell. It was a story about a team of four Navy Seals that ended up being in a fire fight with over a hundred Taliban in Afghanistan. Lutrell alone survived it. It was an amazing story and gave me a new found respect for our military men, regardless of how I feel about the war itself.

I have three brothers in the military. The middle one was wounded in Iraq from an IED and participated in the battle of Fallujah.

It's really remarkable to hear their perspective. The youngest of the three, who is in Afghanistan (and highly recommends Lone Survivor), says that newspaper reporters basically don't go outside of Kabul and rely entirely on second-hand stories for their reporting. He says that his unit has been in multiple firefights, yet the news reports about those fights barely resembles what took place on the ground. In all of that time, he has seen one (1) reporter.

Jeff, have you read any of Michael Yon's work?

This is fairly representative of his work, though a bit older: Gates of Fire

Yon is one of the few true imbeds writing from Iraq.

I bought this book last week and will probably start it tomorrow...I'm glad you recommend it.

As someone who has served in Iraq as a chaplain, I find most mainstream media reports fall far short in telling the story of what is taking place in Iraq and other places. It books like these which tell a truer story.