It was still dark as David approached the crest of the little ridge. The eastern horizon was not even gray. It was early. But he knew this trail well. Every morning before dawn and every evening before dark, he would walk down to the well and carry water back to his family in town. His father depended on him and he was pleased to help.

He heard them before he saw them as he crested the hill. If he hadn’t been looking at the ground and daydreaming he might have noticed the flicker of the torch before he almost walked into them.

He had never seen so much as single Roman solider on this trail before. Every day, morning-by-morning he would travel down to the stream for the morning’s water without incident.

What are soldiers doing here? What business could they have in this part of Galilee? What do they want?

The torchlight allowed him to quickly assess the situation: it was a small Roman unit, about 10 men.

Behind them he noticed what looked like a man in civilian clothes. He was pulling a small cart.

The unit was stopping.

David tried to back down the ridge slowly, but it was too late.

It was the man out front speaking in the common language. But he was moving to the rear to do something. He barked a few commands to his men in the Roman tongue.

If he called out to me, David wondered, why was he approaching the person in the rear? Perhaps it wasn’t me. David began to back down the hill again.

“Hey, where are you going? Come here, I said!” Now the Roman was looking at him.

His stomach leapt, his heart sank and they merged into one expanding lump in his chest. He had never been this close to Roman soldiers.

But the soldiers seemed bored, moved to sit down, and paid no attention to him. The man pulling the cart said sheepishly, “So much for my duty. 1000 paces.” His expression was plaintive. The solider in charge grunted, made a swift “don’t bother me” motion with his arm, and turned to walk toward David.

David wondered how they had found this man to pull their cart in the darkness of the evening? He didn’t want to know.

But now the Roman marching right up to him. He looked down at David, a good two heads taller. “What is in your container, boy?”

“Water for my family, sir. I am just now returning from the well.”

“Hmmm. We need it. Fill the canteens of my men.”

Oh, he thought, he prayed, Lord, if only this, just this.

“And when you are finished,” he continued, “fill the container in the cart at the rear.”

When he finished filling their skins and topped of their reserve water David started off down the hill to fill his jug again, but the soldier called again, “Boy, don’t go yet. Come with me.” They walked to the rear of the column. 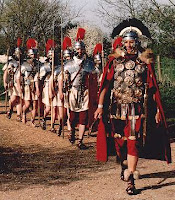 The man who had been pulling the cart was standing tense. His eyes met David’s. He was a fellow Jew. The man looked insulted, then turned his eyes on the solider and David gasped. The hatred was unmistakable. He had seen that look before on his uncle, the zealot, and resistance leader. Put a weapon in this man’s hand, David thought, and the Roman would be dead.

But now the soldier was speaking to David: “The cart is not heavy and you are young and strong. We need you to pull the cart for a while. We’ll move out again in a moment.” The solder turned and walked toward his men.

The Jewish man began to walk back in the direction from which they soldiers came.

Need me, David thought. Ten Roman soldiers, each 5 times as strong as me and you need me? But he suppressed his angry sarcasm. Then he remembered. Isn’t this precisely what Messiah, Jesus, had encouraged them to do as disciples? He had heard his father and his pastor talk about just this.

He was disappointed. Somehow he thought the occasion might be a bit more dignified. Not something like this, back behind the village, no one at all in sight, the light of the sun just now graying the horizon. This was ridiculous. He felt neither love nor hate, only annoyance. Nor did he care at all what happened to these miserable Roman soldiers. What options do I have, he thought.

But he stood by the cart until orders were given and the troop set out again.

Well, the Roman was right: the cart was not very heavy and the path was level, so it wasn’t bad at all.

As they marched, the troopers’ armor made noise like sea shells bouncing in a wicker basket. And walking behind them, he noticed the smell. Not simply hot, unwashed soldiers, but something more. Then he remembered. That new smell he had encountered for the first time shoulder-to-shoulder with Gentiles in the mixed crowds that followed Joshua Messiah and in the assembly of the disciples every week. Shellfish, pork, and whatnot. It came out of their pores. He would have a hard time getting used to it.

He daydreamed most of the time. But when the leader commanded his men to halt, he noticed they had stopped by a small house. The soldier went to the door. He couldn’t hear the conversation, but the soldier came back to his troops with an armful of vegetables and with a man trailing him.

“Your duty is done, boy. You may return to your village.”

David looked at the man behind the soldier. The man diverted his eyes and looked as if he shrugged.

The soldier’s eyebrows rose, and the man behind him looked shocked. “Let me guess, “the Roman said, “You are a disciple of Jesus. Right?”

“Correct, sir. I will serve you for another march.”

The Roman shook his head and winked at the other man, “I guess you can go back home. This boy is a disciple of that crucified-fellow. They are an odd lot.”

David wondered if he was mocking him. But when the Roman turned back to his troopers, he thought he saw something more than mockery in his expression. Was it curiosity? At least that, maybe more. David prayed for the man. Didn’t some Roman soldiers follow Jesus? He was sure of it. Maybe this man would be one of them some day.

When they finally stopped again, David’s arms were stiff and his feet hurt. When he set the cart down, he also sat down to rest. When the Roman finished speaking with his men, he walked to the rear.

“Go, boy. You have done your duty and more.”

Before David could respond, the soldier had turned and addressed his men in the Roman tongue. One of the men came over and stood by David. What now? David thought.

“Lucius will take the cart from here. You are free. Go home.”

As he turned to go he noticed for the first time that morning how bright the new day was. The sun was well over the horizon. He surveyed the trail, following it back with his eye up and over the little hill behind him. The path back home was now quite evident. He would not get lost. He smiled. Everyone would be worried about him, but he knew when he returned his father would be pleased.
Posted by Jeff Meyers at 7:12 AM

I miss reading this kind of stuff you used to post to your old site. Wonderful, Jeff. I still remember reading the "Nelda Boswell Scroll" and thinking how GOOD the writing was. - Ron Dodson