. . . my wife and I celebrated our 28th anniversary. So even though it was the hottest weekend of the year so far (over 95 degrees) my wife and I spent two nights at the Omni Majestic in downtown STL. The accommodations were very, very nice. The room was spacious and they even brought us 2 bottles of champagne to celebrate. I think the second one was a mistake, but I didn't complain.

Friday evening we strolled down Washington Avenue and had a beer or two at one of the local pubs. Downtown St. Louis is nothing compared to, say, Chicago, but there are a few blocks that show some signs of hope. We ate dinner at Mosaic, a modern "fusion" restaurant. Everything is tapas, which, if you don't know (as I didn't), means that servings come in small portions. For me, that sounded scary - girly-sized portions of food on little plates surrounded by colorful, but inedible vegetable "decorations." Uh oh. Well, it wasn't like that at all. We started with some yummy hummus. Then we sampled their three soups - all quite good. For an entree I had New Zealand Lamb "Saltimbocca". Very tasty. An adequate portion. Chris had the Wild Mushroom and Pancetta Napoleon. No meat. Can you imagine it? But we both liked the food, the atmosphere, and the service a whole lot. I recommend Mosaic. It was a pleasant surprise. They are moving to a new location in a few weeks. I think they'll be on Washington Ave a block east of where they are now.

I must say, however, in the interest of "full disclosure" that about 2 hours later I ordered a 1/2 pound burger from room service at the hotel. Chris ate a nice portion of it, too.

Yesterday we saw a movie - The Bourne Ultimatum. Great action flick. Lot's of fun. But it's till hard to beat the very first Bourne film.

For dinner we ate at the St. Louis Gast House, a relatively new German restaurant on Chouteau. Hey, what's the deal? There's so much German history and tradition in St. Louis, but where are all the German restaurants? It was easier to find good German cuisine in Houston or in Niceville, FL, for that matter, than in St. Louis. That's just weird. The Gast House is just one of a few German restaurants in town. I think it's less than a year old. It was okay, but not great. The service was a little slow on Saturday. I have to cut them some slack because there were two huge parties. Even so, the food was mostly sehr gut. But don't get steak. Get sometime German. Chris's strip steak was not very good. I had some the German sampler - some wienerschnitzel, a link of weisswurst, some kartoffel knödel (potato dumplings) with spätzle and sauerkraut on the side, and something else that I can't remember. My food was delicious. The best part was they served Warsteiner Dunkel and Bitburger beers on tap.

Oh, and before we went to dinner we opened a bottle of Jordan 1994 Cabernet Sauvignon. Very nice. 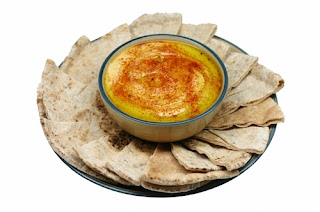 Lunch was Greek both Saturday and Sunday. On Saturday we ate hummus and gyros at Olympia, one of the well-known Greek places in town. Hummus was fine, but the pita bread was a bit hard and tasteless. The gyros weren't bad, but not great. Sunday afternoon had the same at Mediterranean House Apollonia (6836 Gravois Avenue). The hummus was great and the bread was super - grilled and moist. I thought my gyro at Apollonia was better than Olympia's. If you're in St. Louis, check it out.

Hey, all this talk about food might obscure the most important point about this weekend, my wonderful wife! Happy anniversary, Sweetie! What a woman!
Posted by Jeff Meyers at 9:58 PM

Yeah, it does seem that St. Louis is lacking in German food. We have lost a couple of good restaurants it seems. This town is probably better known for it's Italian stuff on the hill.

MABRUUK ("Congratulations" in Arabic) for 28 years. Grace and I celebrated our 21st in June. Time flies!

If you ever want some good hummos, we have a little hole in the wall about three blocks from our apartment here in the Middle East. It's creamy, good, and cheap.

you ever been to the Black Forest- I think it's over off of Cherokee- I could be wrong. I remember going there years ago- they had a polka band and great food.

I googled Black Forest- it is indeed off Cherokee. Only now it is a Mexican place with that wonderful mural of the Rhine river valley. Evidently they serve a mean salsa.

That's a hoot. Reminds me of India Palace (I think that's the name) near the airport. They bought an old Polynesian restaurant and didn't bother to change out the decor.