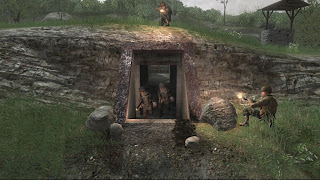 Since I'm on vacation this week I've got time to play a few more games than usual. Jeffrey and I are playing through Gears of War together. It's okay, but not great.

One thing I really love about the Medal of Honor and Call of Duty games is their attention to historical detail, especially when it comes to guns. Shooting futuristic weapons in Gears and Halo is fine, but using WWII era rifles and machine guns is really cool. I just finished playing through Call of Duty 2 for the Xbox 360.

You might think, for example, that the best guns are the big machine guns, the BAR or the Thompson. They are fine for some situations. But the game has done a great job of making you appreciate the utility of the legendary M1 Garrand. Sometimes said to be the rifle that won WWII, it was a great semi-auto infantry rifle chambered for a 30-06 round. If you've ever actually fired one, you'll know that the kick is minimal, a lot like the AR-15 because they both have gas-powered systems that eat the recoil.

Anyway, I found myself carrying two weapons - the Tompson to clear out houses or for close combat, but once you get out into the open or are firing from a window, the M1 is the rifle to have. I used some of the discarded German rifles and submachine guns, but none of them worked as well as the American weapons.

Interestingly, a study was done by the Army's Continental Command Operations Research Office (ORO) in the 1950's analyzing the statistics from over 3 million casualty reports from WWII and the Korean war. Here's what they found:

• The majority of rifle fire casualties were produced at ranges of 100 yards or closer.

Add to this the research results of Gen. Marshall: he discovered that four-fifths of all foot soldiers in WWII never fired a round in any given battle. Think about it. There was one exception to this rule. The soldier who carried the BAR (Browning Automatic Rifle) or the Thompson almost always fired. And once men heard the automatic fire (from their side) they usually engaged.

By the way, studies like these led to the development of the AR-15, the most effective combat weapon for the foot soldier in modern warfare.

The Call of Duty 2 game has stunning graphics on a HD monitor. The lighting, muzzle flashes, etc. are done quite well. Sometimes I would just stop and look around and admire the graphics. At one point you find yourself on the outskirts of a French village just before a thunderstorm. They recreated the green-yellow atmosphere so well it was uncanny.

And the sound effects are wonderful. You even get the little metallic ping when the M1's clip is finished and shoots out of the top of the rifle.

Well, I hope my Call of Duty 3 comes before my vacation is over.
Posted by Jeff Meyers at 3:27 PM

I'm about half the way through Call of Duty 3 on our PS2. It's about the only game I play. I tried Medal of Honor, but I didn't care for it as much.

Oh, and I should add that you are absolutely right about the M1 Garrand. However, I prefer the German MP 40 over the Thompson. I switch these two whenever I can.

I agree with you; I hear a lot of gamers getting bored with WWII games, but I greatly prefer them to the sci-fi shooters that seem to be nearly the only FPS alternative. I haven't played CoD2, but in CoD and Big Red One, I always chose the Garand as my rifle. At least in the game, it's far more accurate than any of the other rifles. I'm more of a semi-automatic fan though (because high rates of fire make me happy), and I'm with Wayne, I usually go with the MP40. Of course, that's also because the ammo is easier to find, because of killing all the Germans. ;)

The next CoD is going to be modern warfare--I'm not sure how I feel about it, but if they keep the realistic feel, I'm sure it'll be good. It's really the tendency to fill every game with aliens or mutants that upsets me. Another one you guys should try is Rainbow Six Vegas. I've only played it in co-op mode, but it was one of the best co-ops I've played--something you and Jeffrey would probably enjoy.

COD 3 arrived this afternoon and the graphics are even more amazing.

I don't quite understand. The statistics you site seem to indicate that the long range accuracy of the M1 was not really a factor. It would also seem that the fully automatic guns were better since most of the fighting was very close range and random firing. Was the M1 better than any other gun at 100 yards?

Robert: yeah, the point was that long range rifle fire was not every effective. What was needed was a weapon that would be able to place a lot of rounds relatively fast on short-to-medium-range targets.

MP40s and Thompsons are good under one hundred yards (which is a stretch) for automatic fire. But the M1 was effective at longer ranges 100-300.

I mainly quoted those stats to make a statement about the M-16 (now AR-15). It really combines auto fire at short range and medium-range accuracy.

Also, how did the M1 Carbine compare? I think they used it more in the pacific didn't they? I used to have a BB gun that was a copy of a Carbine. It was pretty cool.

Not sure about the carbine. But I believe it was simply a modified Garrand to work in the jungle. Carbines, remember, are shorter, lighter and easier to handle in close situations.

The Wikipedia entry on the M1 Garand clears things up a bit. It says that the M1 Garand gave US troops and advantage due to it's semi-auto mode. Most often German or Japanese troops used manual only rifles. So it wasn't the range but the semi-auto mode that was such a great advancement.
http://en.wikipedia.org/wiki/M1_grand

Also, the entry on the M1 Carbine says it was developed more for defensive purposes and never intended for front line use. But it was light and easy to use. Had better range than grease guns or Thompsons or pistols. So that's why it was used. There were complaints that it didn't have enough power though.
http://en.wikipedia.org/wiki/M1_carbine

Sorry for the late hit.