At Expense of All Others, Putin Picks a Church

STARY OSKOL, Russia — It was not long after a Methodist church put down roots here that the troubles began.

First came visits from agents of the F.S.B., a successor to the K.G.B., who evidently saw a threat in a few dozen searching souls who liked to huddle in cramped apartments to read the Bible and, perhaps, drink a little tea. Local officials then labeled the church a “sect.” Finally, last month, they shut it down.

There was a time after the fall of Communism when small Protestant congregations blossomed here in southwestern Russia, when a church was almost as easy to set up as a general store. Today, this industrial region has become emblematic of the suppression of religious freedom under President Vladimir V. Putin. 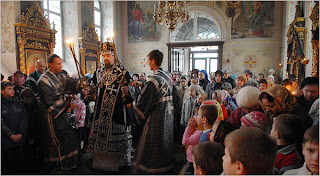 Just as the government has tightened control over political life, so, too, has it intruded in matters of faith. The Kremlin’s surrogates in many areas have turned the Russian Orthodox Church into a de facto official religion, warding off other Christian denominations that seem to offer the most significant competition for worshipers. They have all but banned proselytizing by Protestants and discouraged Protestant worship through a variety of harassing measures, according to dozens of interviews with government officials and religious leaders across Russia.

This close alliance between the government and the Russian Orthodox Church has become a defining characteristic of Mr. Putin’s tenure, a mutually reinforcing choreography that is usually described here as working “in symphony.”

Read the entire NY Times article.
Posted by Jeff Meyers at 11:32 AM