. . . or why we should use "Yahweh" and not "LORD" when we read the Hebrew scriptures in church.

6. If this is such a big deal, so obvious, why haven't we had Bible translations that translate the name of God as Yahweh? Answer: follow the money. Bible publishers want to make money and making such a widespread change in the way the OT is translated would mean loss of profit because it would be too much of a departure from KJV tradition. It's about money. Always is. Bibles are the most profitable product for publishers. The Bible remains the top seller in America. Above all, publishers want to make money on their new translations. It's not about accuracy but adding up currency.

7. Isn't it fascinating to learn that the KJV translators had the sense to know that YHWH absolutely needed its own translation in at least four places in the OT.

Ex. 6.3 - "And I appeared unto Abraham, unto Isaac, and unto Jacob, by the name of God Almighty, but by my name JEHOVAH was I not known to them."

Psa. 83.18 - "That men may know that thou, whose name alone is JEHOVAH, art the most high over all the earth."

Is. 12.2 - "Behold, God is my salvation; I will trust, and not be afraid: for the LORD JEHOVAH is my strength and my song; he also is become my salvation."

Is. 26.4 - "Trust ye in the LORD for ever: for in the LORD JEHOVAH is everlasting strength."

Interesting, huh? In Isa. 12:2 and 26:4 they are evidently trying to get the reader to link LORD and JEHOVAH since the Hebrew text has only YHWH and not adonay. Even though that's an odd way to translate these verses, they at least recognized here that one had to alert the reader to the presence of YHWH for a proper understanding of the text.

I would argue the same for just about every occurrence of YHWH in the text. What's the difference between these five passages and all the passages in the Psalms that say, "Praise the name of Yahweh"? If you don't put the actually name of Israel's God where it belongs, you end up with a translation that makes a completely different statement than the original. When the Psalmist is translated as saying, "The Lord is our God," that statement makes no sense at all. What Lord? What Master? The whole point of saying that "Yahweh is our God" is that other nations claim that the true God has another name, another character. Psalm 105:7, "He is Yahweh our God!" 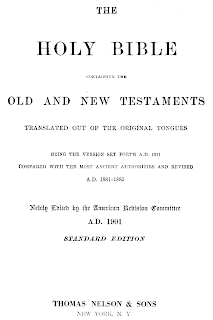 8. Now here's something you may not know. The old Calvinistic Standard, the 1901 American Standard Version (ASV), is the only version to consistently translate YHWH as Jehovah throughout the entire OT. Check it out. I differ, of course, about the vocalization of Yahweh. So does almost every Bible scholar today. It's not "Jehovah," but I would take that any day over the LORD/Lord lunacy we have now. Check out the ASV sometime.

9. The fact that we don't know the precise vocalization of YHWH doesn't matter. How can this be used as an argument? Just as we say "Jesus" in English instead of the Greek "Iesous," there is no reason not to say Jehovah, Yahweh, Jahve, or something else similar. Getting the exact vocalization right is immaterial. The important thing is that we hear and see the personal, covenantal name of God in the text. From Hebrew, it seems clear that it was sometimes vocalized "yeho" or "yehu" from the names of the kings. So I don't think tonal precision to ancient Hebrew usage has any importance.

10. So what do we do with the fact that "the Jews did not pronounce the name YHWH"? When I read statements like that I ask, "Which Jews?" Too often, when these kinds of statements are made people think of the Jews living during the time of the OT. But there is very little evidence to suggest that Isrealites and later Jews living before the inter-Testamental period consistently practiced this superstition. In fact, there's lots of solid evidence to contradict such speculation. I'll get to that in part 3.
Posted by Jeff Meyers at 9:33 AM

You mentioned the ASV was the old Calvinistic Standard. What do you think of the World English Bible? The translation is not finished yet, but what is finished is available for reading on the internet. They claim to be from the line of the ASV and they use Yahweh as God's name.

I've been using it for some time now for that reason alone. What other versions of the Bible would you recommend that call God by his name?

I've not looked closely at the WEB. I need to do that. Thanks for the reminder.

We use the ESV in our service. I think it's a great translation, but in our public reading we just substitute Yahweh for LORD whenever it comes up in the text.

The WEB is really awkwardly phrased for speaking out loud, but nice otherwise.

Thinking of reprinting your book on covenant renewal worship with the title 'Yahweh's service'?

Just jesting there, this is interesting to hear. I hope you cover the Septuagint, the NT use of it and its use of kyrios...