This is my Brother's World

For many the Christian world view is relatively simple.

1. God created the world and man.
2. Man was created to obey God.
3. Man disobeyed and so God justly punished him.
4. But God mercifully decided to send his Son into the world to save man.
5. The Son then became man at the appropriate time for man's salvation.
6. Now those who trust the Son can go to heaven when they die.

For some #4-6 are important to understand for the purposes of attaining eternal life. But when Christians think about and interact with their culture, it is sufficient to impress upon people the fact that the world and man have been created by God and things would go better for everyone if we heeded his moral law. Getting people to confess the existence of a "Creator" is what really matters. 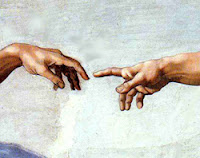 I'm overstating this, of course. But only a little bit. We tend to read Genesis one with deistic results. Even though the text talks explicitly about the participation of the Spirit in creation and on the sixth day the Creator says, "Let us make man in our image," nevertheless, we resist reading the creation account with trinitarian eyes.

But according to the inspired commentary given to us in the New Testament, the Son and Spirit do not begin their association with the world and humanity only after the fall. The eternal Son was intimately involved with creation from the start. More than that even, the Son was the reason God the Father created the world in the first place. The Father created the world as a gift for his Son. He created humanity to be the Son's brother, or if we think about humanity as whole as feminine, then we were created to be the Son's wife.

Now, there's all sorts of things to say about this. But I'll settle for a few brief comments.

Second, the NT makes is abundantly clear that the Son was a participant in the work of creation. When John tells us that "all things were made through him" (that is the Word) and apart from him nothing was made (John 1:3), he is drawing out the full meaning of the narrative of Genesis one. God fashioned the world by speaking, as we here in Psalm 33:6, "By the word of Yahweh the heavens were made, and all the host of them by the breath of His mouth." The Son/Word was a divine agent of creation, according to Col. 1:16, 1 Cor. 8:6, Eph. 3:9, and Heb. 1:2.

Third, more than that, however, according to the inspired commentary in the NT, the Son not only participated in the act of creation but he was the reason for creation. It is not enough to say that he was there and acted with the Father and the Spirit during the process of creation. The astonishing revelation in the NT is that "all things were created for him" (Col. 1:16). God the Father created all things FOR the Son. Let's be clear about this. Even before the fall, God the Father intended the created world to be for his Son. The created world was intended to be a gift for his Son.

This has huge implications for the way we present the Christian world view. We are not being faithful to the nature and purpose of created reality if we are content to talk simply about a generic God creating the world. It's much more complex than that. And the complexity introduces richness into the vision. Our vision is not like Islam's. The world is related to God in richly complex ways because God is Father, Son, and Holy Spirit. This rich trinitarian vision (which I've not really even begun to unpack) has great evangelistic potential, IMHO.
Posted by Jeff Meyers at 11:40 AM

Can't wait to hear more on this...