The Son of God - Part VII 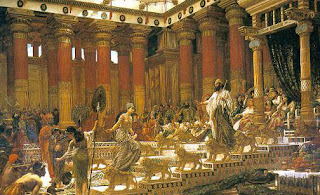 2 Samuel 7 begins with the historical assessment that the king (David) dwelt securely in his house/palace because Yahweh has given him rest from all his enemies. David, however, feels uneasy about this and tells Nathan the prophet, “See now, I dwell in a house/palace of cedar, but the ark of God dwells in a tent” (7:2). Nathan advises David to do all that is in his heart since Yahweh is with him. But the word of Yahweh comes to David in a dream instructing David that he is not the one to build the house. Rather, Yahweh will build David a house/palace through his seed (7:12), which is explained as “I will establish his kingdom." Furthermore, it will be the seed/son of David who will build the house/palace for the Name of Yahweh (v. 13) and Yahweh will thereby establish “the throne of his kingdom forever” (7:13b).

Significantly, since earlier in Yahweh’s recounting of the history of his presence with Israel (7:5-11a), his central concern seems to have been to remind David that he has indeed “dwelt” and been “with” his people (7:9) even if it was by means of a mobile tabernacle (7:7) and rotating judges (7:11), from now on, however, his Name and presence will be mediated through the throne of his newly established “house” of David’s son. This is why, even though it is occupied by human rulers, the Davidic throne can be identified with the royal throne of Yahweh himself (1 Chron. 28:5; 29:23; 2 Chron. 9:8). When the son of David rules on earth, the reign of Yahweh is properly on earth.

There are many interesting details related to the interpretation of 2 Sam. 7:1-16 that we cannot pursue here. What we should note for our purposes is that many of the motifs that are central to Old Testament redemptive history—those dealing with kingship, kingdom, throne, house, house-building, seed, rest from enemies, and the covenantal promise that Yahweh will “be with” his people—these are all correlated here to the prophetic promise to David that his “seed” would be given the full rights of Sonship by Yahweh his Father. Yahweh promised to elevate David’s seed to reign upon the throne as son, thereby establishing both his and David’s house and kingdom forever.

Even though provision is made by Yahweh for sinful human “sons” of David who would need to be “punished with the rod” when they misuse their new exalted status (7:14b), clearly the reader’s expectations are heightened by Yahweh’s use of front-end loaded words like “seed” and “kingdom” that hearken back to central covenantal promises of the past (Gen. 3:15; 9:9; 12:7; 13:15-16; 17:7-12; 22:17-18) as well language that cannot but point toward some definitive future fulfillment. The same can be said for certain passages from the prophets, such as Isaiah 9, which is connected with the promise of 2 Sam. 7:12-16 that David’s offspring/son will reign on his throne and establish his kingdom: “For to us a child is born, to us a son is given; and the government will be upon his shoulder, and his name will be called ‘Wonderful Counselor, Mighty God, Everlasting Father, Prince of Peace’” (Isa. 9:6)

Jeff, I think sometimes you refer to 1 Sam 7 when you mean 2 Sam 7. Great post, and very helpful.

Whoops. You be right. I'll correct that. Thanks for the note!