Since I'm on a roll with little critters on flowers here's another one. 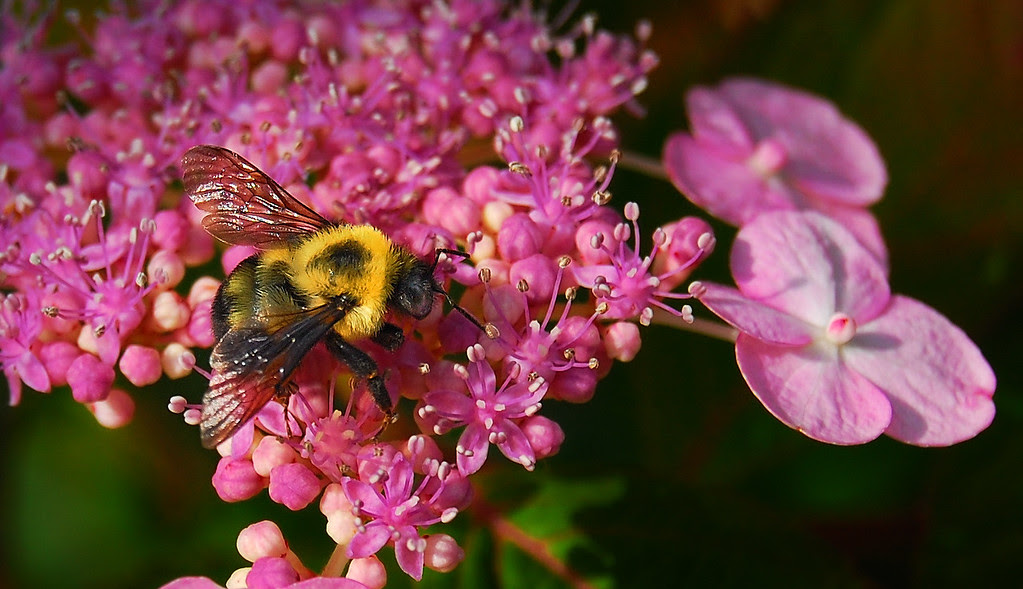 Now I need to say something about this image. I proves something. It was not taken with my best Nikon camera. It proves that you don't need an expensive, pro camera to take a good picture. What you need is the right light and good timing. The early morning light for this shot was really nice. I walked outside to take some test pictures with a new used Nikon D40 I got from eBay. It's a gift for someone. I also got a 18-55 kit lens with it. I wanted to test the camera, so I just started taking pictures around the yard to make sure everything was working well. I caught this bee on the flower at just the right time. I don't think this shot would have been any better with my big, pro camera. I believe it would have looked about the same. Then too, of course, I wouldn't have gotten this kind of image with a little point and shoot. I had the D40 set on shutter speed priority (1/800 sec) to try to catch the moving bee. So one would have needed at least a DSLR for this shot. But what I didn't need was a 12.5 megapixel FX camera body or a $1000 prime Nikkor mirco lens. The little 6.1 mp D40 with a $70 lens worked just fine. Another caveat: I wouldn't have been able to take the macro shot of the little green hopper with this lens. But I would have been able to hook up my Nikkor micro lens to the D40 and get almost the same shot. I know some of you guys with D40s and D50s out there. Get out and capture some great images! You don't need an expensive camera. You can do it!
Posted by Jeff Meyers at 10:56 AM

Your photos have inspired me to start shopping for my first digital SLR camera. Do you think I would be happy with a D40, or should I spend the extra $$ and get the D60? Also, do you have the code lines for the "Read More" feature on your blog? It's really quite nifty. Gene (in Wenatchee)

Gene: Thank you for this.

The D40 is a really nice camera. You'll be very happy with it. It's an entrance-level DSLR, so there's some things you can't do with it. But it all depends on what you'd like to get from your camera. Take a look at this and see if it doesn't help:

Second question: the code for the "read more" feature? Hmmm. When I first changed the template, I believe I posted a link to the site in my comments. But I can't seem to find it. If I do find it, I'll post it here again. Sorry.

Gene: I just found the page where you can get the code for the "read more" feature.