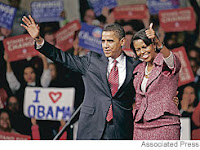 Barack Obama's biggest draw is not his eloquence. When you watch an Obama speech, you lean forward and listen and think, That's good. He's compelling, I like the way he speaks. And afterward all the commentators call him "impossibly eloquent" and say "he gave me thrills and chills." But, in fact, when you go on the Internet and get a transcript of the speech and print it out and read it--that is, when you remove Mr. Obama from the words and take them on their own--you see the speech wasn't all that interesting, and was in fact high-class boilerplate. (This was not true of John F. Kennedy's speeches, for instance, which could be read seriously as part of the literature of modern American politics, or Martin Luther King's work, which was powerful absent his voice.)

Mr. Obama is magnetic, interacts with the audience, leads a refrain: "Yes, we can." It's good, and compared with Hillary Clinton and John McCain, neither of whom seems really to enjoy giving speeches, it comes across as better than it is. But is it eloquence? No. Eloquence is deep thought expressed in clear words. With Mr. Obama the deep thought part is missing. What is present are sentiments.

Read the rest of the essay.
Posted by Jeff Meyers at 8:08 AM

Email ThisBlogThis!Share to TwitterShare to FacebookShare to Pinterest
Labels: politics